Helius is a nonprofit based in the ReCity coworking space in Durham that, with numerous other community organizations, is working to “rewrite” Durham’s story. Helius provides free mentoring and coaching to people building businesses out of necessity to support themselves and their families. Each month, CityWell would like to highlight one of Helius’s entrepreneurs in support of the great work of these businessmen and women. 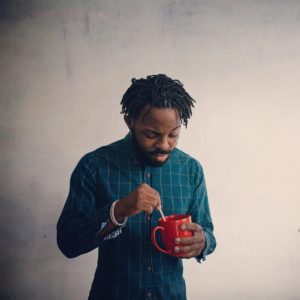 “When talking to Matthias Payton, the mind behind Mia’s Jasper and Gold (or Jasper’s for short), the word which may come to mind first is passion, quickly followed by accessibility. As we spoke over the phone, through his detailed exploration of his business, and the ideals which sustain it, Matthias’ passion for health, education and communication became clear. For Matthias, his passion is found simply in the process by which he goes about creating his infusions, be it through the meticulous, thorough researching of ingredients and brewing techniques or by his genuine thoughtfulness when addressing the stereotypes and preconceptions about how tea is processed and consumed. It is for him, a total process of cultivating the best admixture of health, quality and taste by being both intentional and communicative about his process. As Matthias says, nothing about what he does is secretive or inaccessible. The other component of his passion is his joy for talking about his world with others.

Originally from Rocky Mount, NC, Matthias has called Durham home for the last 16 years. As he puts it, he credits his main source of inspiration for Jasper’s with his Christian background and faith in God. “My business allows me to put to action my morals for individuality, and varietying, and combining [those] with constant love.” And while Jaspers has only been operating as an official business since December of 2019, Matthias has been researching, practicing and sharing his craft for the past two years before this point. As he put it as we spoke over the phone, one of his major learning experiences was understanding that being an entrepreneur and running a business was a lifestyle, not just another job. Helius’ helped him add structure to his business, and give it stronger legs to run with. But it was Matthias’ constant dedication to his craft as a part of his life which has fueled him into success.

For now Matthias splits his time between his business, and other sources of income, he still spends over 20-30 hours a week focused on his craft. For him, it is the response to his work which lets him know that his time is being well spent, as he says “I am constantly humbled by the number of people that love my product. The feedback I received shows me that the work I put in is being noticed.” It is that dedication to his craft and his desire to be communicative with his customers that has allowed Matthias to stay diligent in his response to COVID, as he transitions now into not only selling his tea online, but also attempting to maintain the same level of informativeness he would with his in-person sales. He’s doing this by, as always, being accessible through his social media, while also setting up his own website and other resources in order to make his product more readily available to the community at this time. Though it’s a new challenge for him, as it has been for all us, the realities of COVID-19 -and the stresses of being a small business owner in general – have not seemed to stop Matthias’ passion.”